Scaling and root planing in Sarasota

Scaling and root planing is a treatment that is performed to reverse the damage caused by advanced gum disease, and to prevent further harm from occurring. At Russo Periodontics, we are committed to your gum health, which is essential to the health and viability of your teeth.

In the early stage of gum disease, gingivitis, you may have symptoms such as reddened gums and mild irritation. It's possible, though, that you won't even be aware of anything being wrong. That is not unusual. Gum disease can be traced back to plaque and tartar, the bacterial substances that are also responsible for tooth decay. Everyone should have a teeth cleaning at six month intervals, as part of a complete oral examination. Existing plaque and tartar will be eliminated, which has the added benefit of reversing the effects of gingivitis. Our periodontal clinic in Sarasota urges you to make teeth cleanings a high priority, because if gingivitis is allowed to progress, those mild symptoms mentioned earlier can easily lead to more alarming ones, among which are persistent bad breath, bleeding when you brush your teeth, and receding gums. Scaling and root planing must be done at that point in order to avoid the erosion of vital gum and bone tissue, which may then cause your teeth to become loose. Scaling and root planing at our periodontal clinic in Sarasota is not all that different from a standard teeth cleaning, except that it does deeper, down to the roots and beneath the gum line. Periodontitis, the later stage of gum disease, means that plaque and tartar have penetrated to the level where without prompt action, there is a real chance that one or more teeth could fall out.

Don't let gum disease get past the point of no return. Contact our periodontal clinic in Sarasota now to arrange an appointment.

John Russo's Practice has been recognized as a top Sarasota Dentistry practice in 2021.
Congratulations to the entire team!

Dr. Russo is a member of the American Academy of Periodontology and on the Board of Trustees 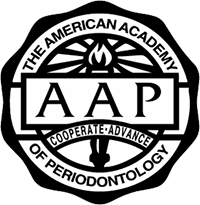